Mochi, a vegan dessert that is made of Japanese rice cake called Mochigome (a type of sticky rice), has now become a worldwide phenomenon even in the western world. Vegan Mochi can be difficult to define because it takes so many forms. Sometimes it’s hard as a rock, sometimes it’s soft and gooey.

The most popular vegan Mochi is the soft and gooey one with sweet fillings such as Matcha Mochi, Black Sesame Mochi, and Peanut Mochi. People like to enjoy vegan Mochi with tea, thus, making vegan Mochi the best tea party dessert with growing popularity.

In this article, you will find: 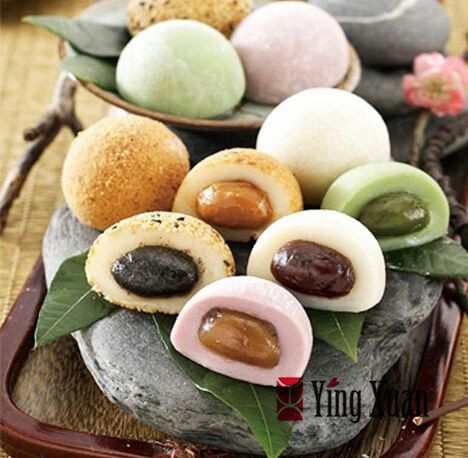 Vegan Mochi has a long cultural history in Japan. It was invented in the ancient Kofun Period in Western Japan as early as 500 A.D., when Japan was heavily dependent on rice agriculture. Rice cultivation became so important to the Japanese culture, that every season’s extra rice crops were used to make rice cakes. These cakes were then served in ceremonies, to pray for and thanked Rice Gods for successful harvests. So, the tradition of eating Mochi on New Year’s probably started there.

In Japan, and now in many parts of the world, Mochi is enjoyed most with Tea. For matcha enthusiasts, Matcha Mochi and Matcha Tea become the best combination!

Although Mochi itself was created by Japan, it was said that the pounding process of Mochi originated from China. The traditional process of making Mochi requires a very intensive labor process, it includes two people cooperating in order to make it a success. They must keep a steady pace in order for one person to pound and the other to flip or wet the Mochi.

This pounding process of Mochi requires a wooden hammer, a bowl that you put rice into before pounding, and a thick board placed at the bottom of the bowl to absorb the pounding force. The wooden hammer must be soaked in water the night before pedaling, to prevent rice from sticking to the mallet. 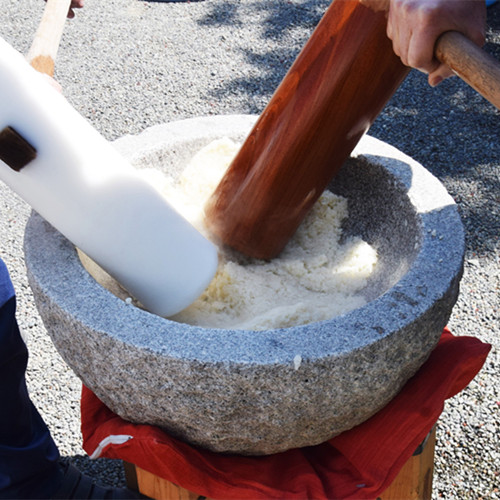 Fortunately, nowadays, we do not have to pound the rice to get Mochi. People have created a simpler version of creating Mochi which can be made with a microwave. But the outcome of the microwaved Mochi would lose its stickiness, chewiness, and freshness fast. As a result, a new type of “ready-to-eat” Mochi (non-microwaveable) has become the mainstream delicacy. There are many different flavors of “ready-to-eat” Mochi such as Matcha Mochi, Black Sesame Mochi and Peanut Mochi. The most popular one is Matcha Mochi.

Vegan Mochi consists mainly of sweet glutinous rice flour, water, sugar. Other additional ingredients such as black sesame, matcha, or peanut are to create the paste inside. So… what actually makes the Mochi sticky and gooey texture?

The sweet glutinous rice is not normal everyday rice. It Is actually a short grain glutinous rice that is highly soluble and sticky when it is being cooked. Short grains that contain a high amount of amylopectin and zero amylose create the stickiness and gooeyness of the Mochi when the rice is being steamed. Pounding adds air bubbles to the mochi which contributes to its gooey, stretchy texture. Thanks to the air bubbles added through the hammering process, the most delicious Mochi worldwide was less dense, more stretchy, and easier to eat.

The easiest way to enjoy Mochi is the “ready-to-eat” Mochi. They are usually in the round ball shape with sweet filling. Fillings such as peanut, red beams, matcha, and black sesame are made into soft paste. These pastes are then jammed into the heart of the Mochi balls.

When enjoying Mochi, people like to have a bit of Japanese taste. Thus, Matcha Mochi is one of the most popular flavors to buy! 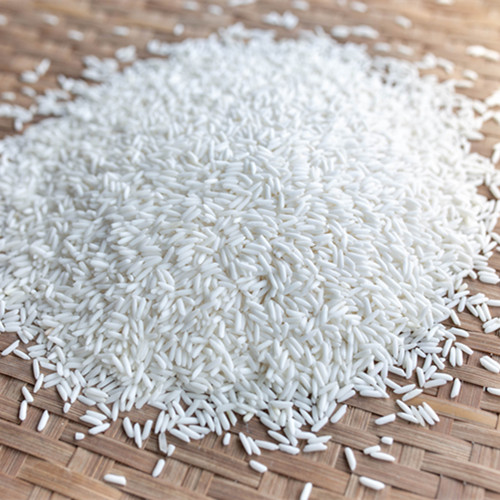 Where to Buy Ready-to-eat Vegan Mochi

We are Ying Xuan Zhuang, a famous Taiwanese company, specializes in creating Mochi that is suitable for vegan eaters and can be eaten at all times that is fresh and always gooey. We have created multiple flavors such as Matcha Mochi, Sesame Mochi, and Peanut Mochi, which are all the most popular flavors worldwide.

Our products can be stored for up to 9 months as we add few preservatives and have earned many government certifications such as HACCP, FDA, SGS, and ISO across the globe. Our Mochi is a certified vegan dessert that is yummy and looks out for your health all at once. There are 6 pieces in each package. You can enjoy different flavors with your friends and loved ones.

Here are the specifications of each package:

This sweet, gooey, and sticky dessert can be enjoyed in so many different ways as below:

Nowadays, vegan Mochi is eaten all year around not only because it symbolizes good fortune, but it is also a great vegan diet as more people are looking to improve their diet and becoming vegetarian.

By now your mouth is probably watering. Why not get a few “6 packs” of vegan Mochi from Ying Xuan Zhuang now? You can enjoy this ”ready-to-eat” delicacy anytime, anywhere. 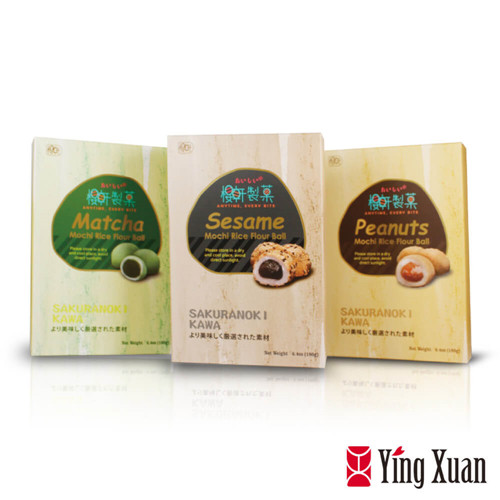 What is Matcha Powder Good for? 5 Matcha and Green Tea Powder Benefits

How to brew oolong tea properly?